Carry Her To The Bedroom [Pictoral Instructions] 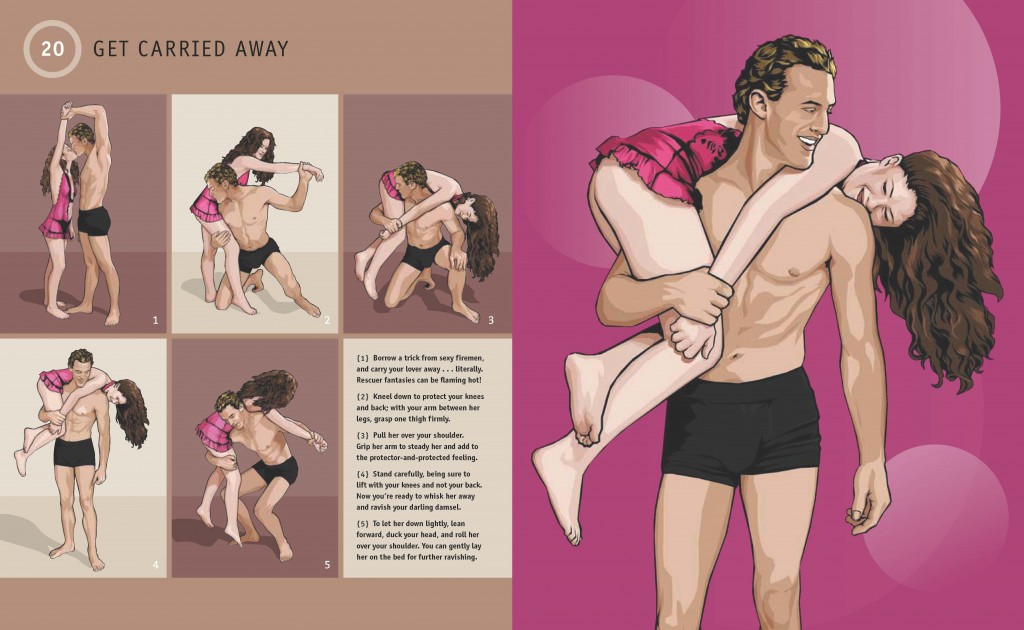 Illustration Courtesy of “Hot Sex: Over 200 Things You Can Try Tonight”

If you need to create p0larity in your sensual life, because equality in your everyday relationship has destroyed your masculine feminine balance in the bedroom, here’s a great idea for getting her attention.

This is an excerpt from my interview with seduction expert Christian Hudson of The Social Man from the Revive Her Drive module called, “Dance of Polarity.”

Susan Bratton: If you’re not having good sex with your wife, it’s not likely she will ever step up and take the lead. It is your inevitability as the man to lead her into her sensuality.

Christian Hudson: Absolutely. There’s a lot that can be done in terms of reengaging, like taking her out on dates, taking her to romantic places. A lot of it is very common sense: “Hey, why don’t you go recreate one of your first dates or one of your second dates.” Maybe not exactly the same restaurant or the exact same place, but get the kids with a babysitter for the evening, go out and buy your wife a stunning dress that you think is really sexy, and surprise her with it. Tell her you’re taking her out tonight and to leave her cell phone at home, and just plan for fun. I think a lot of men are afraid of taking that leadership role, but they really are obligated to step up and say, “Hey, this is what it’s going to be. This is what I want. This is what I expect. This is my role as a man.” There’s so much that can be done in terms of fun moves and whatnot, and a lot of it is about creating that tension and pulling away.

I’ll give you an example. One thing that I love to do every now and then while making out on the couch is just pick my girl up over my shoulder and carry her into the bedroom and throw her on my bed. That’s that toughness, that’s that strength, that’s that desire.

Susan Bratton: That’s very hot. Every woman I know would secretly love for that to happen in a fun and sexy way if she feels good about her man in general.

Christian Hudson: Even more fun is if she fusses or if she screams and says, “Put me down,” which some women inevitably will. You slap them on the butt; you say, “Shut up.” It’s not a mean thing, because you’re laughing while you’re doing it. You’re giggling, and you’re having fun together.

Christian Hudson: If a man is very comfortable with this kind of thing, she’ll test him. This is where she puts up the resistance. On the other hand, I think what most often makes it not work out is if the woman senses that the man is not fully congruent with this sort of behavior. She’ll feel like it’s weird, and she’ll think, “Ugh, what is he doing?” I remember the first time I did this, I was a little nervous about it, and the girl said, “What are you doing? This is weird.” Something snapped in my head, and I thought, “Screw this; I’m just going to smack her on the butt.” I said, “What are you talking about, shut up,” and I gave her a little smack on the butt, and she laughed and giggled and she said, “Oh jeez, what are you doing?” and she started to get into it and have fun.

When a woman has been with a man for a long time and she knows what to expect of him and this sort of behavior suddenly comes out, of course she’s going to put up resistance. She doesn’t expect this from him. I think the thing that the man wants, especially if he’s been in a long-term relationship, is to water her garden, or he wants to till her soil, or he wants to cultivate her love and do whatever he needs to get her to open up and to bloom. Some women are so closed off. It’s been the cold of winter, and that tulip bulb has just recessed, seeded into itself, and it’s deep in the cold ground because it hasn’t felt any sunshine; it hasn’t felt any water; it hasn’t felt any warmth for a long time. Now it’s, “Wow, what is this? Am I allowed to open up? Should I trust that I could bloom and be radiant?” For women who haven’t experienced that for a long time, there may be some resistance, and the man just has to continue to push through it and show both toughness and also tenderness. When he throws her on the bed, maybe he wants to just sit there for a moment and slowly and gently caress her. Maybe he wants to be really assertive again and jump right on her and start making out with her furiously. Whatever it is, he has to be confident that, with these sorts of moves, he’s pushing forward, and he’s ultimately unlocking something in her that all women truly desire and want to feel.

Susan Bratton: I think the belief that women don’t want sex is limiting. I love the idea of cultivating the tulip bulb. That’s definitely her Yoni. The tulip bulb, guys; that’s her beautiful, sweet genitals. You’ve got to warm all those sweet spots up, and you’ve got to give her a lot of great orgasms before you ever ask her to give one to you. You’ve got to fill her up with warmth and growth and nurturing and love and make that tulip bloom. Then you can harvest your garden.

Note: If you cannot pick up your woman and carry her, use The Voice of Authority, another technique by David Van Arrick in the Sexual Sticking Points module of Revive Her Drive to command her with your words and voice alone to do what you want. She will love being playful with you in this way if you set it up for her well.